Opinion: Why SC lawmakers must address education reforms that work

Opinion: Why SC lawmakers must address education reforms that work
Posted by P. L. Thomas at 4:13 AM No comments:

An old debate over religion in school is opening up again

An old debate over religion in school is opening up again
Posted by P. L. Thomas at 5:52 AM No comments:

RYOT and HuffPost Films premieres a new short documentary about the man behind a 1982 school shooting attempt.

RYOT and HuffPost Films premieres a new short documentary about the man behind a 1982 school shooting attempt.
Posted by P. L. Thomas at 3:52 AM No comments: 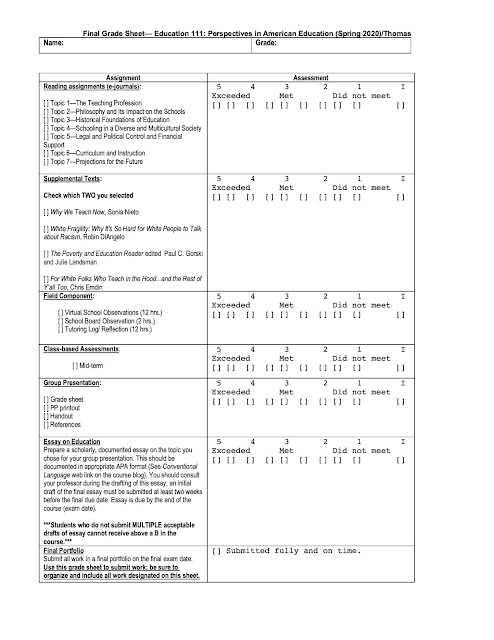 Thread by @James_S_Murphy: "The latest WSJ journal piece about the SAT is the usual sloppy mess (what on earth is an adjusted SAT score?) but how a high school's average SAT score correlates with socioeconomic advantage powerfully knocks down the myth […]"
Posted by P. L. Thomas at 5:25 AM No comments:

Teacher Effects on Student Achievement and Height: A Cautionary Tale

Teacher Effects on Student Achievement and Height: A Cautionary Tale

NBER Working Paper No. 26480
Issued in November 2019
NBER Program(s):Program on Children, Economics of Education Program
Estimates of teacher “value-added” suggest teachers vary substantially in their ability to promote student learning. Prompted by this finding, many states and school districts have adopted value-added measures as indicators of teacher job performance. In this paper, we conduct a new test of the validity of value-added models. Using administrative student data from New York City, we apply commonly estimated value-added models to an outcome teachers cannot plausibly affect: student height. We find the standard deviation of teacher effects on height is nearly as large as that for math and reading achievement, raising obvious questions about validity. Subsequent analysis finds these “effects” are largely spurious variation (noise), rather than bias resulting from sorting on unobserved factors related to achievement. Given the difficulty of differentiating signal from noise in real-world teacher effect estimates, this paper serves as a cautionary tale for their use in practice.
Posted by P. L. Thomas at 3:28 AM No comments:

Pete Buttigieg Is a Lying MF

Pete Buttigieg Is a Lying MF
Posted by P. L. Thomas at 3:24 AM No comments:

Racial Slurs in Academic Spaces: A Reader
Posted by P. L. Thomas at 11:38 AM No comments:

Nearly half of New Orleans' all-charter district schools got D or F grades; What happens next?

Nearly half of New Orleans' all-charter district schools got D or F grades; What happens next?
Posted by P. L. Thomas at 5:52 AM No comments:

What US Schools Can Learn From Finland’s Approach to Education

What US Schools Can Learn From Finland’s Approach to Education
Posted by P. L. Thomas at 5:52 AM No comments:

Atlanta Public School Officer Derrick Hammond walks through the cafeteria greeting students during a lunch break at Grady High School in Atlanta, Ga.
—Melissa Golden/Redux for Education Week-File
By Stephen Sawchuk
November 7, 2019
Most of the violent attacks in schools over the past decade were committed by students who telegraphed their intentions beforehand—and could have been prevented, a new report from the U.S. Secret Service concludes.
Most of those students were motivated by a specific grievance, and every single one was experiencing extreme stress. But there remains significant variation among the perpetrators, and schools should use a comprehensive analysis to detect true threats rather than trying to profile students, the report says.
The report, released Nov. 7 by the Secret Service’s National Threat Assessment Center, analyzes 41 violent incidents in schools between 2008 and 2017. The devastating school shootings in 2018 in Parkland, Fla., and Santa Fe, Texas, helped prompt the study, but were not included in the report.
The analysis generally confirms the conclusions of the agency’s influential 2002 publication on school safety, which said checklists of characteristics supposedly common to school shooters were not helpful in preventing violence.
Instead, that earlier study popularized the idea of threat assessment, in which teams of educators, administrators, counselors, and school resource officers compile academic, behavioral, and other evidence to decide whether a student who’s made a threat is acting out or actually poses one.
“The implications for schools seems to be the same,” including using those teams to triage threats, said Anthony Petrosino, a school safety expert and director of the WestEd Justice & Prevention Research Center. Schools should also consider broader strategies such as trying to connect every youth to at least one caring adult in the school, he added.
Still, some areas of emphasis in the report differ from the past—most notably its attention to the attackers’ social and emotional health.
The analysis comes as school safety remains a top issue for school districts—and a contested one. Many districts have struggled with two, often competing philosophies: one, to “harden” schools through physical measures and school police, which nearly half of all schools now employ; or two, to invest in efforts to improve school climate, such as through restorative justice programs favored by civil rights groups who note that discipline policies and the presence of school police too often lead to the disproportionate punishment of black students and students with disabilities.
On that tension, the report effectively punts: “Schools should implement a threat assessment process in conjunction with the most appropriate physical security measures as determined by the school and its communities,” it states.
Ryan Petty, whose daughter Alaina was killed in the Parkland shooting, said he hoped the report could help bridge those debates.
It’s not about figuring out, ‘Boy this student is a threat, let’s get law enforcement involved,’ he said. “That’s the perception a lot of educators have and it couldn’t be farther from the truth.”

Here are some of the report’s key findings:
An eye-opening section of the report likely to kick up debate also details the combination of social, emotional, and behavioral factors that may have been linked to the attacks.
At least 40 percent of perpetrators had a mental-health diagnosis; 54 percent had received some kind of mental-health treatment; 80 percent had been bullied; and all but two came from homes with adverse childhood experiences, such as an incarcerated parent, abuse, or financial difficulty.
And every single attacker had faced high levels of stress from social, family, or academic problems. Almost three-quarters also had been disciplined at school within five years of the attack.
Those issues will resonate in the wake of the massacre at Marjory Stoneman Douglas High School in Parkland. Some families of the slain students there have blamed the tragedy in part on the district’s alleged failure to act on a record of the shooter’s mental-health problems, and its decision to put him in a program meant as an alternative to suspension and expulsion.

The report also noted that four attackers had been referred to their school’s threat-assessment team, three of them within a year of the incident. In some cases, the team didn’t review all the available data, and in one case, a team considered a student low risk despite several troubling pieces of data.
That’s a good reminder that risk-mitigation approaches shown to be effective, like threat assessment, aren’t foolproof, and they depend on good implementation to work.
Petty said threat assessments teams need to be meeting regularly. That way they can be comfortable with each other, with the threat assessment process, and be willing to share pieces of relevant information when a threat occurs.
“My guess is where these are failing, you’ll find threat teams that are meeting only when there’s an identified threat. Where they’re working, they’re meeting on a regular basis,” he said.
Many states have considered or passed legislation requiring schools to conduct threat assessments since the Parkland incident, though there is considerable variation in their policies.
Florida, Kentucky, Maryland, and Texas required all schools to begin it in the 2019-20 school year. Washington state schools will join them in 2020-21.
WEB ONLY
RELATED STORIES
RELATED OPINION
Posted by P. L. Thomas at 5:50 AM No comments:

from "Married to the Sea"

Universal public education has two possible—and contradictory—missions. One is the development of a literate, articulate, and well-informed citizenry so that the democratic process can continue to evolve and the promise of radical equality can be brought closer to realization. The other is the perpetuation of a class system dividing an elite, nominally “gifted” few, tracked from an early age, from a very large underclass essentially to be written off as alienated from language and science, from poetry and politics, from history and hope—toward low-wage temporary jobs. The second is the direction our society has taken. The results are devastating in terms of the betrayal of a generation of youth. The loss to the whole of society is incalculable. (p. 162)

“One of the violences perpetuated by illiteracy is the suffocation of the consciousness and the expressiveness of men and women who are forbidden from reading and writing, thus limiting their capacity to write about their reading of the world so they can rethink about their original reading of it.”

"What does education often do? It makes a straight-cut ditch of a free, meandering brook."
Henry David Thoreau

from "married to the sea"